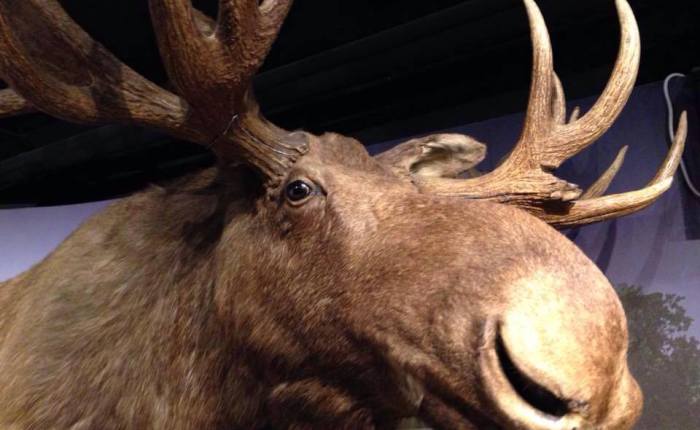 “Okay then, Montgomery the Moose and friends, let’s get started,” said the great purple dragon who called himself The Scary Stanley.

Montgomery wasn’t sure what that meant. He was just happy to be reunited with most of his friends, although he was concerned about where Tommy was.

“So…” Montgomery started, hoping that something would follow. Nothing. He gave up. “What am I supposed to be doing again?” END_OF_DOCUMENT_TOKEN_TO_BE_REPLACED

“You’re looking for your sons?” Montgomery the Moose asked, already sure of which sons the small woman was talking about.

“Jerry and Tommy,” she replied. “They’re about my size. Have you seen them?”

Montgomery was too surprised to know what to say, but the Chocolate Lab replied “No. Who are you, and what are you doing here?”

“I’m Dorothy,” Jerry and Tommy’s mother replied. After examining the Chocolate Lab closely, she continued gently, “You don’t remember me, do you, Fred?”

The Chocolate Lab’s whole demeanor suddenly softened, as if considering a long-forgotten memory and trying it on for size. He used to have recurring daydreams of being a dog that was made out of flesh, bones, and fur – not chocolate – and going on adventures with two small companions, as a team of some sort, but those dreams faded away a long time ago. Now they all came flooding back to him – Dorothy was one of his companions. And they weren’t dreams. They were memories. END_OF_DOCUMENT_TOKEN_TO_BE_REPLACED

Roger the Raccoon was hungry and thirsty. Since arriving in this land, all she could think about was finding her friends, but now her tummy was rumbling. She needed food.

The bushes weren’t a kind she recognized, and they were empty of fruit. She couldn’t find any insects either. But up ahead she saw some trees. Surely she’d find something there.

She climbed up one particularly odd tree – it had a tall bare trunk which suddenly bulged out at the top like it had exploded. There were giant leaf-like branches with dozens of long, thin leaves coming off each one. And below the leaves, tucked into the tree’s bulge like a nest of some kind, were enormous green seeds of some kind – bigger than any seeds she’d ever seen. END_OF_DOCUMENT_TOKEN_TO_BE_REPLACED

The human hipster male nodded, and looked at Bobby through his glasses to see if he was following.

Bobby was not following.

“Broken…?” He paused. “Magic…?” He paused again. This pause was long enough that Spaceship wondered if Bobby’s next question was going to be IS…?!

“Indeed,” confirmed the human hipster male finally. “And you were sent here to find the creature who is going to fix everything.” END_OF_DOCUMENT_TOKEN_TO_BE_REPLACED

Montgomery the Mouse scampered through the grass as quickly as his little legs could carry him. Open space like this made him nervous, especially on such a bright day, when it would be so easy for a bird of prey to spot him.

Why was it so bright, anyway? The last thing he could remember, he was in the cold early winter weather of Maine with all his friends, but now he was in hot, bright, summer sunlight, all alone. And even the sunlight didn’t seem right – it seemed to be coming from everywhere at once.

“Montgomery! Over here!” It was Jerry. He was higher up on a hillside far away – at least twenty feet, which is a lot when you’re as small as they are. Luckily for Montgomery, mice can run fast when they need to.

As he sprinted he saw a shadow overhead – a large bird of some kind, which was his biggest fear. His heart beat faster than it ever had before, and he kept running. Keep going, he told himself. You can do it. END_OF_DOCUMENT_TOKEN_TO_BE_REPLACED

Spaceship ran on solar power. Which was great. Most of the time.

Spaceship was also super chatty. Which was great. Most of the time.

The problem always came when she was super chatty while they were flying under the clouds on overcast days.

“Isn’t it a wonderful day? I mean, I know it’s cloudy and everything, but really, life is just wonderful, isn’t it, and I love flying you around and taking you from place to place and seeing everything on all these different planets. It’s just weird, though, don’t you think, how all these planets look the same and oh no I’m running out of power I’m going to have to… shut… dooownnn… nooooooowwww…”

And with that, Spaceship shut down, and plummeted towards the ground.

“Ugh,” said Bobby to himself. “Not again…” END_OF_DOCUMENT_TOKEN_TO_BE_REPLACED

The voice Montgomery heard was coming from a dog. But it was the most delicious-looking dog he’d ever seen. It seemed to be made entirely of chocolate. A full-grown Labrador – moving and alive – but chocolate. A Chocolate Lab.

It was a few feet in front of him, and moved in a way Montgomery didn’t understand. It looked like it was solid chocolate – melting a little in the hot sun – but moved its legs and head just like a regular dog.

“I must be dreaming,” Montgomery said, wondering if the dream would allow him to taste chocolate. “I must have knocked myself out running at that tunnel. This can’t be real.”

“Oh, you gonna try that are you?” asked the Chocolate Lab. “That whole ‘this isn’t real’ thing? Don’t think that’s gonna help you, you big lug. I assure you I’m very real.” As if to prove it, the Chocolate Lab stepped forward, opened its mouth, turned its head sideways, and closed its jaws on Montgomery’s right leg. END_OF_DOCUMENT_TOKEN_TO_BE_REPLACED

“We’re close,” Tommy told the group, as they made their way through a clearing.

“You’ve been saying that for ages,” Roger replied, speaking for her friends. She had been going in and out of naps for hours, and after waking up seemingly just to make her comment, she snuggled back in to her cozy spot between Montgomery the Moose’s shoulders. The frogs, who had joined the group also, slept close by.

“It’s true, you’ve said it at least five times,” Montgomery the Mouse responded. In fact, he had been keeping track, and this was the twelfth time, but he wanted to be kind to his friend.

“I know, but this time, I’m sure,” Tommy said with excitement. In his mind, this was a quest a long time in the making; a quest of heroes, even. But he also wondered, don’t heroes usually also mean that there are villains? Was the dragon the map mentioned something they would need to fight? That sounded kind of exciting, but terrifying at the same time. He started to shake a little just thinking about all the possibilities ahead of them. END_OF_DOCUMENT_TOKEN_TO_BE_REPLACED

At 3 AM, Tommy was still awake on his pile of leaves in the lean-to he and Jerry had built. His mind kept imagining what they would find the next morning. Every time his tired body took over and sent him into sleep, his imagination ran wild. In his dreams, he flew with his brother through a world that looked completely different than their own – made up of colorful circles, squares, and triangles of different sizes. In his next dream, he was chasing a large dinosaur-like creature around a large human city. And in his next, he and his mom were helping a girl his own size track down a super villain.

Every time he woke up, he was sore and uncomfortable, and with all the craziness of the last few days it was hard to keep track of what was a dream and what was real.

He looked over and saw that Jerry was asleep. But it was starting to get light, so he decided to get up. As tired as he knew he’d be, his mind was racing too much now to get back to sleep.

As the friends made their way through the woods, Montgomery and Montgomery both took deep breaths, and enjoyed the familiar scents of pine needles, fir cones, and the faint, distant smell of s’mores. They were close to home.

But there was also another aroma drifting through the woods. This one became stronger with every step of Montgomery the Moose’s large body. But unlike some of the other smells the smaller creatures would sometimes pick up on, this one wasn’t coming from their large friend, and this one smelled great.

“Pizza!” Jerry exclaimed, and licked his lips. Tommy took a deep breath in, soaking up the smell of cheese, tomato, and his favorite – pepperoni.

“Pizza?” Roger the Raccoon asked. That name seemed familiar, and she had a vague memory of it from her childhood.

Montgomery and Montgomery weren’t so familiar with the smell, and were keen to find out more about this “Pete’sa.” Pete’s a what? And who is Pete anyway, wondered Montgomery the Moose silently. END_OF_DOCUMENT_TOKEN_TO_BE_REPLACED

Montgomery the Moose
Blog at WordPress.com.